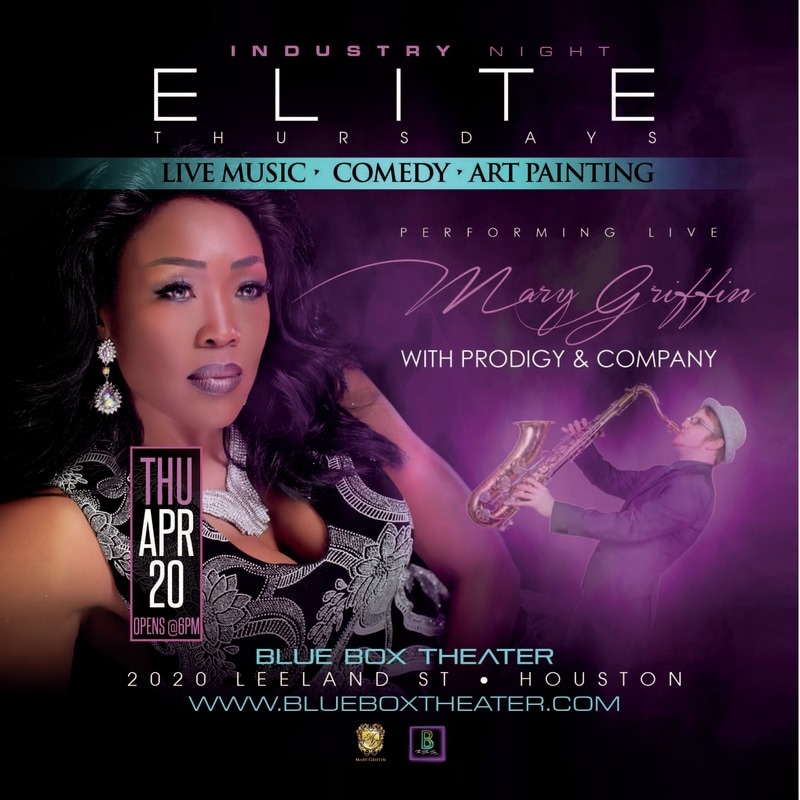 “March 4th, 2017 - I call Miss Mary Griffin the soul manifestation of pure underrated divine music Goddess in the making the one and only songstress making history and she is a legend. Mary Griffin is an awesome singer. Raw soul and rock. Pop, gospel, and Jazz. Prepare to be entertained all the way to the soul. Highly recommend”
- Deacon James Prayingforu Little, Facebook Review (Mar 03, 2017)

“February 15, 2017 - One of the best experiences we have encountered in a long time. Mary Griffin is amazing and in my opinion should be up there with Beyonce, Alicia Keys, Adele, etc. She is full of energy and ultimate performer who gives the audience 120% of herself. Can't wait to see her again. The venue was perfect and the food was delicious.”
- Joanne S. Naponic, Facebook Page (Feb 15, 2017)
THE EVENING
Mary Griffin will be performing a lively, inspiring show.   The show is with her full band, and is opened  by Prodigy & Co.  It will be held on Thursday, April 20th at the Blue Box Theater in Houston, TX.  Doors open at 6:00 pm with the show starting at 8:00 pm and running about 90 minutes.

MARY GRIFFIN
As a 30 year entertainment professional with a Grammy nomination and 21 Platinum records to her credit, her band consists of lead and bass guitars, keys, drums, and often horns and a sax, all with and backup vocals, to give you a powerful, moving experience.  Career highlights:
COME EARLY to get the best seat.  There is really no bad seat in the house, since anyone who has seen Mary perform in the past knows that she gets out into the crowd, up close and personal.

VIDEO RECORDING
Mary has fans around the world from Australia, to Asia, Europe, Russia, Africa, and all points in between.  For most who cannot make it to this event, we will have professional videographers onsite and we will be recording  the show.

APRIL 20th - ONE TIME ONLY ** FREE ADMISSION **
NORMALLY - TICKETS SOLD HERE
There are 2 different seating levels, from the stage back, as follows:
1.  Reserved VIP Level 1 sold per table, or HiTops for 4 at $35-$50/person;
2.  General Admission on Level 2, priced at $35 at the door with bar seating, HiTops and standing room;